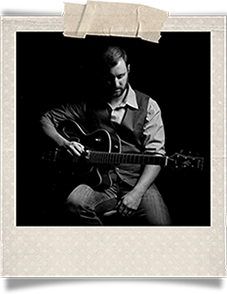 Jim began his musical journey as a teenager, as many young musicians do, strumming out some simple chords and singing along to his favorite songs. The craft of songwriting and performing was a form of self expression that Jim developed a profound and lifelong passion for. After almost a decade of pursuing technical and academic proficiency on the guitar through the study of jazz, funk, blues and music theory Jim has now coalesced his vast musical knowledge with his roots as a singer-songwriter. Songwriting and solo performances are regular and integral aspects of his already incredibly busy musical schedule.

You can catch Jim with Nick Phaneuf on bass, at brunch at Blue Mermaid Island Grill on the 3rd Sunday every month.

Check out the ‘Shows’ page to find where Jim will be performing next!